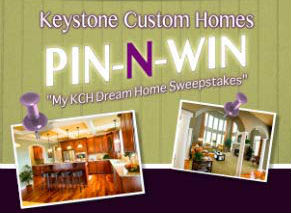 In a society where consumers are on the go and connected 24/7, it’s more important than ever for businesses to be where their customers are. For the homebuilding industry, this not only means that you need a presence on Facebook, Twitter and a company blog, but also on sites such as Pinterest and Houzz. Recently, one Pennsylvania homebuilder increased their connection with their potential customers who are on Pinterest by hosting a successful Pin-N-Win sweepstakes, which was won by Maggie McDermott.

The social media campaign asked customers to create their own KCH Dream Home Board, which they would then fill with images from the Keystone Custom Homes Pinterest page, including the sweepstakes photo. At the end of the contest, the builder randomly selected one winner for a $500 Pottery Barn contest. The contest, which ran for a little more than a month, attracted more than 120 entries and increased their Pinterest followers to 387. However, the effects of the campaign were more wide spreading than that with more than 500 new Facebook fans also garnered during that time.

“The Pin-N-Win sweepstakes was a huge success in many ways,” stated Janette Hawkins, Vice President of Marketing and Information Technology with
Keystone Custom Homes. “We were able to spread our brand on Pinterest and interact with its followers along with gaining more attention on Facebook and other social media sites with our updates about the sweepstakes. Also, contestants moving to the areas in which we build, such as Maggie, were able to gain a new vision on what we have to offer.”

This campaign is a fantastic example of how homebuilders should be and are using the sites where their potential customers are to not only increase their presence and branding, but to also interact with them in a meaningful way that will make them more likely to buy from you in the future.

To learn more about this campaign and Keystone Custom Homes, visit www.KeystoneCustomHome.com.